Once upon a time, a girl with a strange look in her eyes came into this world.

She had many dreams, perseverance to make them real and an urge to live her life to the full.

EDUCATION: She graduated from drama school the Greek Theatre of Art and also got her degree in Theatre Studies from University of Athens. And yes, she does speak French and plays the piano…

FIRST ROLE: Her first appearance on TV was on the first episode of “Officer Bekas’ stories” (dir. Gr. Karantinakis) where she was playing a mysterious maid who might have committed a murder or might not. Stage performances, short films and more TV roles followed.

AMBITIONS: She thinks ambitions are goals disguised as dreams. Ambitions never end. The success and the recognition will come.

MOMENT OF WEAKNESS: She hides her weaknesses as much as she can. If she ever gets hurt, she probably would keep it to herself.

OBSSESED WITH…: With cats. She considers them (the way they move and react, their look) an inspiration for actors and artists in general.

PERFECT MAN: She is quite sure he simply doesn’t exist!

However, someone with a good sense of humour, clever eyes and lot’s of charm, would have a chance with her. 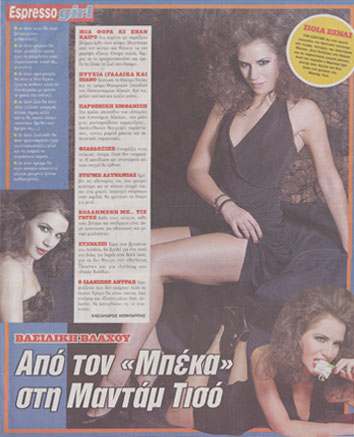