Vasiliki Vlachou is a native born Athenian with… intercultural interests!

After completing her studies in drama school at the Greek Theatre of Art Karolos Koun and at the Theatre Department of the University of Athens, she performed several plays and took part in various TV series (Officer Beka’s stories, Mystery Stories etc).

A few months ago, she decided to move to London, in order to broaden her cultural horizons, by going to plays and attending acting seminars.

When staying at the same place, you can fall into a routine. That’s why I decided to move to London, so I could gain new experiences. Besides, if I don’t do it now, I am never going to do it.

While in London, she started working as an attraction hostess at Madame Tussaud’s and six months later, she happened to go on holiday to Cyprus.

As I was on holiday, I just popped by to say hello to some people who I knew worked in the Ant1TV production team. I thought it was a good chance to leave my updated CV.  They told me that they are about to start a new TV soap opera and were looking for the female lead and… I got the part! “My problem with women”, this was like a further training for me. Having to learn so many lines in such a short period of time and getting to know how to be natural in front of the camera was a real challenge. At the end of the soap opera, Vasiliki will go back to London, to her old work duties.

I have to work to pay my rent. My target is to keep learning new things, to become better in what I am doing and to start acting there. When I feel like I have done everything I could, I will return.

Meanwhile, I am always open to a good part and willing to say “yes” to whatever will help me to make a progress in my acting. I don’t feel like I have an exquisite talent.

However, I do focus wholeheartedly on every role I have and attempt to make them real. 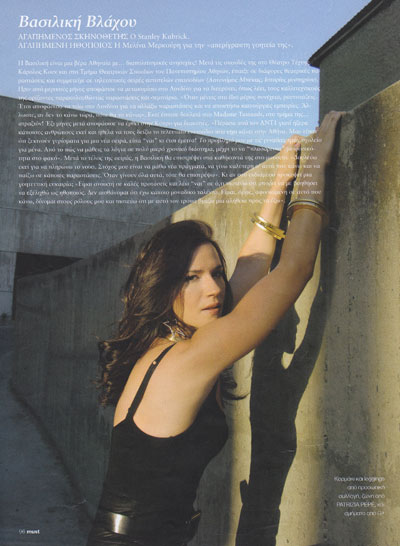