“When I moved to London, I didn’t know anybody. I had no connections in the industry and I refused to take money from my parents. The reality made me realise that I needed to start from scratch, in order to earn my living. So, I did all sorts of jobs”

When she decided to move to UK, she could only count a few appearances in well known TV series. With her first short film (UK production) gaining a positive reaction from audiences and winning awards, Vasiliki Vlahou has every reason to be happy with the progress in her career!

The English National Theatre has always been one of her biggest dreams. So, after she appeared in a few Greek TV series such as “Officer Bekas” (“Istories tou Astunomou Beka”), “Mermaids” (“Gorgones”), “True Loves” (“Alithinoi Erwtes”) and “Mystery Stories” (“Istories Musthriou”), she moved to London.

“This trip for me was a really big bet. I knew that if I could make it happen here, I’ll be capable of succeeding anywhere. Without a second thought, I announced to my family and friends my decision: my new base from now on would be the UK”.

The young actress didn’t let any difficulties and challenges stop her from pursuing her dream. Being a daughter of two teachers (her father, a chemistry teacher and her mother, a French language one), from a very young age she resisted their desire for her follow in their footsteps. Instead, she got her degree in Theatre Studies from the University of Athens, whilst at the same time, undergoing training at the drama school of the Theatre of Art (Karolos Koun).

“In the beginning, everyone thought that I was doing acting on a mere whim. When I was a drama student, people who knew me were betting on how soon I’ll get bored and give up. My parents realised I was taking it seriously, when they first saw me in well known TV series and taking part in “Iphigeneia at Aulis” directed by Sotiris Chatzakis”. Gradually, they accepted the whole idea of me becoming an actress”.

When Vasiliki Vlahou came to London, she was on her own. “I didn’t know anybody. I had no connections in the industry and I refused to take money from my parents. The reality made me realise that I needed to start from scratch, in order to earn my living. So, I did all sorts of jobs. I worked as a waitress in restaurants and in bars, usher in theatres, I did sports commercials etc”.

The Greek actress loves her life in UK, and is now more interested in film than the prestigious musicals of the West End. “Regarding the musicals, I do enjoy watching them, but contrary to other colleagues of mine, I don’t wish to perform in them. The last few years, I’m more and more attracted to the cinema than the stage”. Which is how she started writing her first short film script: “I basically wanted to showcase my work, my skills and find a good agent, something that it’s quite difficult in London. I wasn’t actually expecting that what I started doing for my own development and practice will turn out to be so successful”. Her film “Two Persons Max” was officially selected and won awards in several festivals around the world including LA and NY, gaining very positive reaction.

“Two Persons Max is a psychological thriller set in the claustrophobic environment of a lift. The film follows the popular rules of the cat and mouse game without defining the identity of the players. It was filmed at Pinewood studios, directed by Tim Kent and starred Jessica-Jane Clement (Real Hustle) and I. When it completes the festival circuit, I’ll upload it on YouTube, so that everyone can watch it”.

In her free time, she puts on her trainers and goes running in North London where she lives, or she goes for drinks in Soho. “I’m also writing scenes for actors’ showreels which is a good way for me to keep practicing my writing and of course I keep auditioning and going to castings”. 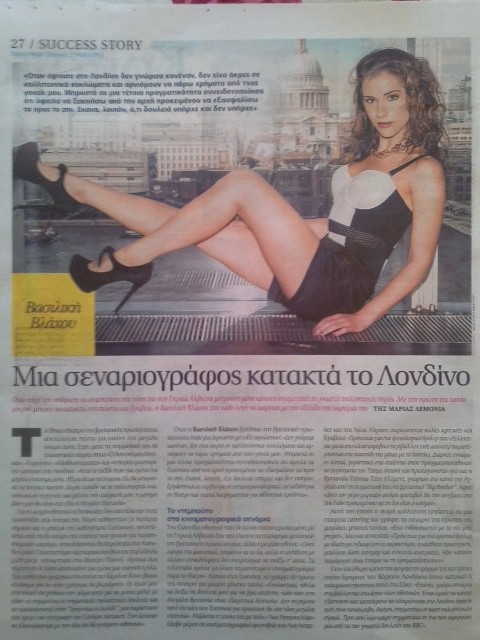